Luciana Kube is currently in her fourth year of the PhD Program in Hispanic Literature of the Modern Languages Department at Florida International University. Her dissertation research focuses on the Colonial Villancico and the syncretic genres of the Eighteenth Century through both the musical and the literary approach. FLAS Fellowship recipient 2019-2020 at the Kimberly Green Latin American and Caribbean Center (LACC) at Florida International University. She obtained her bachelor’s degree in Audiovisual Journalism at UCAB University in Caracas, Venezuela, and her Master of Arts in Spanish at FIU. She received the Monseñor Pellín Award for her dissertation Arte Jesuítico en América Hispánica in 1997. She studied music both in the Conservatorio Simón Bolívar in Caracas, and Conservatori del Liceu in Barcelona. Former member of the Camerata Barroca de Caracas, conducted by Isabel Palacios. Luciana received masterclasses with remarkable professors, such as David Roblou, Jordi Savall, Montserrrat Figueras and Andrew Lawrence-King. She also worked in Teatro Real de Madrid in the Subtitling and Publications department. Her publication Diarios de Venezuela (Espasa Calpe, 2002) is used as an Instructional reading book for Spanish learners all over the world. She has published two articles in the flamenco magazine La Nueva Alboreá from the Instituto Andaluz del Flamenco (2018 and 2019). Luciana is a member of Sigma Delta Pi Hispanic Honor Society.

Eric Miranda’s varied singing career spans more than two decades and has included solo appearances in Chicago’s Orchestra Hall, the Ravinia Festival, and in Millennium Park with the Grant Park Symphony Chorus. Graced with a “pliable warm baritone” (Chicago Classical Review), Eric has performed with Bella Voce Camerata, Tower Chorale, Chicago Arts Orchestra, and Elgin Symphony. In 2019, alongside Salomé Sandoval, Eric appeared in Antonio de Literes’s Acis y Galatea, coproduced by El Fuego and Connecticut-based ensemble, Crescendo. A regular with Newberry Consort, Chicago’s premiere early music ensemble, Eric has been featured in recent seasons, most notably in The Empress: Margarita Teresa, and A Mexican Christmas, a concert that juxtaposes sacred and popular music of the Baroque era in Mexico. He has also been featured in four critically acclaimed Haymarket Opera Company productions, and has twice appeared singing cantatas in Chicago’s Latino Music Festival. Growing up bilingual in Puerto Rico, and studying French in college has influenced Eric’s affinity for languages. Thus, in addition to performing, he is a certified Spanish medical interpreter, and is often tapped to coach choruses and individuals in diction, most recently for Chicago Lyric Opera’s production of Florencia en el Amazonas. 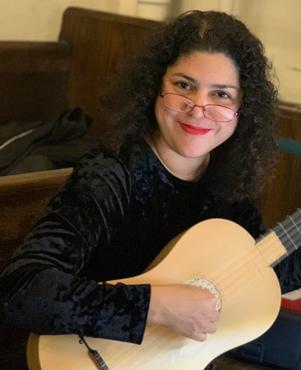 Salomé Sandoval sings and plays a variety of fretted string instruments such as lutes, early and classical guitars. A native of Venezuela Salomé holds a Graduate Performance Diploma in Early Music as a voice (with Laurie Monahan) and lute major (with Doug Freundlich) thanks to a scholarship awarded by Longy School of Music in Cambridge, MA; a Master’s in Arts from Middle Tennessee State University (with William Yelverton) and a Bachelor in Music from Instituto Universitario de Estudios Musicales (in Venezuela, with Luis Zea) both in classical guitar. She has played in master classes with renowned international guitarists such as Leo Brower and Alirio Diaz and lutenists such as Nigel North, Paul O’Dette and Stephen Stubbs, as well as in radio shows, theater, movie soundtracks and television. Award winner in several competitions, Salomé has sung and played early, Latin American, and contemporary music in various ensembles and choirs in Venezuela and the US. She has collaborated in many CD recordings with groups such as Camerata Renacentista y Barroca de Caracas conducted by Isabel Palacios in Caracas, VE and has two of her own: Singing with the Fire and Potions (available in Itunes) containing a variety of songs from early, Spanish, Latin- American and twentieth-century music. Salomé’s recent collaborations with Early Music Ensembles include Raleigh Camerata, El Mundo with Richard Savino, Newberry Consort with Ellen Hargis and her own group El Fuego, with repertoires that range from New World to Spanish Eighteenth Century sacred and stage music. 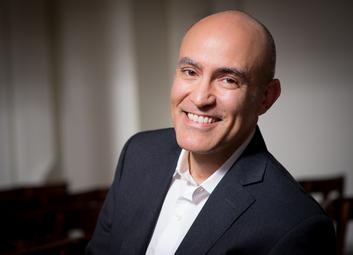 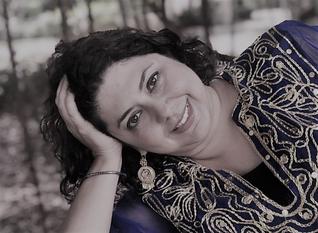 Frances Conover Fitch has toured extensively in North America and Europe and
performs with prominent early music ensembles. She helped found the groundbreaking ensemble for 17th-century music, Concerto Castello, and has been described as a “delightfully inventive and compelling” continuo player. Ms. Fitch has participated in major music festivals, including Tanglewood, Aix-en-Provence, Pepsico Summerfare, Tage AlterMusik (Regensburg), the Boston Early Music Festival, and the Festival de Musica Antigua in Mexico.

Ms. Fitch has made more than a dozen recordings, including a double CD of mu-
sic by Elisabeth-Claude Jacquet de la Guerre.. Her playing has been noted for its “precision and delicacy of wit.”

She was a member of the faculty of the Longy School of Music for nearly three
decades, and served as Chair of its Early Music department. In 2006, Longy awarded her the George Seaman Award for Excellence in the Art of Teaching.

Ms. Fitch is on the faculties of Tufts and Brandeis Universities and The New England Conservatory. In 2012-13, she was Guest Professor at Ferris University in Yokohama,
Japan. She is co-author of the figured bass workbook, Running the Numbers. Ms. Fitch maintains a private studio in the Boston area, and is Minister of Music at St. John's Church in Beverly Farms, MA.